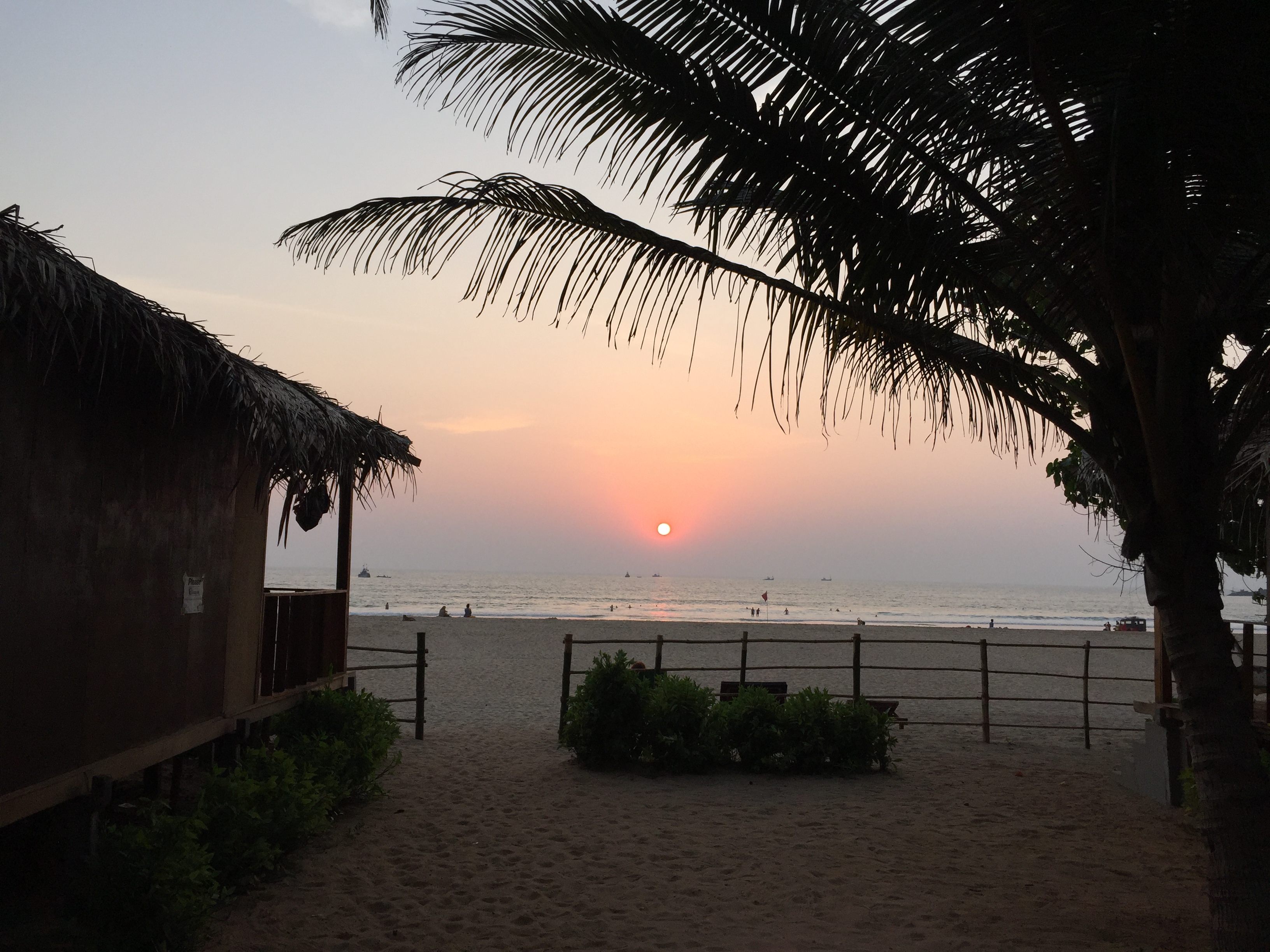 The stunning sunset view from my bungalow

In the movie “The Best Exotic Marigold Hotel” Judy Dench’s character Evelyn resembles India to a wave: Initially you’re overwhelmed. But gradually you realize it’s like a wave. Resist, and you’ll be knocked over. Dive into it, and you’ll swim out the other side.

Throughout my journey, I can not deny that I felt overwhelmed. Overwhelmed by the intensity of car horns, the intensity of people, traffic, shitty roads, train rides, heat and many more… I feel like in the first couple of weeks this caused a block inside me. I wandered around with a tangle in my stomach. I couldn’t enter the shops because of the fear of being ripped out, hence I even couldn’t look at the windows of them because of the possibility that someone will come out and invite me in for a chai. I lost my cool at some point, even became rude sometimes. Despite all of these things troubling me, the fellow travelers I encountered on the road were quite refreshing.

I met Izzy and her boyfriend Tim in Agra. After a brief but delightful conversation, our roads got separeted. After a week or so, we met again in Udaipur at the cooking class of Shashi. Izzy is one of the most positive and energetic people I’ve ever met. She is the owner of the blog thenextsomewhere.com. D’Jeanne is from USA, Montana. I met her through Izzy and spend 3 days in Udaipur which was I think really great. We pretty much have talked about everything under the sun. She is a bright 23 years old who made me forget about how young she is with her intellect and perception about life. Moreover she may be the biggest fan of rickshaws ever. I have never seen a traveler who is obsessed with rickshaws this much. I am fascinated by her fascination indeed. She can be followed on zenandtheartofvegabonding.blogspot.com. In Mumbai it was Pyrylla from Paraguay, an amazing girl with such a beautiful heart… Broke up with her boyfriend while traveling together, came to India and trying to figure out her next steps. We were talking about travel flings and relationships. She said: “It’s sad that it’s just for a while…” I replied without giving much thought: “But honey, everything is a for a while…” In that very moment I felt like I was in a feel good movie or something. You know “love actually” kind of movie. Those words would have been so powerful if said under a dramatic light, wind blowing through my hair and a seagull flying over us in 50 frames per second. Felt like it was wasted under daylight with our pathetic 24 frames per second life. Hahaha, seriously I wish I could make a gif out of that moment and hang it on the wall like a darn animated picture, like the ones in Harry Potter. Yeah, narcissist much?

So once more thanks to these lovely girls my days in India became brighter. India will be india, it doesn’t care whether you like its ways or not, it is what it is. The more you accept it, the more you relax. I never knew I was such a slow learner though. Instead of being pissed off by every guy saying hello and asking me “where from” I should soon discover to answer back “Oh can’t you see, I am from India.” which makes the conversation shorter and more pleasant. Instead of walking by the shops, I should have dashed in and offer less than the half of the price they are asking for and see where the bargain is going to. Instead of resisting to the waves, I should have right dive in. Well, better than never I think.

I arrived to Goa yesterday night, I was able to hear the sound of the waves although I didn’t get a glimpse of them at night. Before diving into a very deep sleep, I remember thinking how refreshing it was again to be able to hear the sound of the waves.This morning I got out of my bungalow and the view was breathtaking. The beach, the coconut trees and the sea… I feel so rewarded after all the shit I had to put up through the trip. After a quick breakfast and went back to my room to put my bikini on. I walked by the edge of the sea, watched the waves coming and going. As I kept walking, the waves kept approaching more and more towards my feet. They kept moving, so did I. We met in the middle… As I walked in, I was feeling that it was going to be a strong encounter. There it was, one giant wave… I stood tall in the water. Just before it hit me, I jumped. As I did, the wave pushed me to the shore with a massive force and I started to laugh like a five year old. Another hit, another jump, another laugh… I don’t know how long this went on like this but that my friends was a real catharsis. That’s how I got purified of my fears and my tangles. Just by breaking the waves.