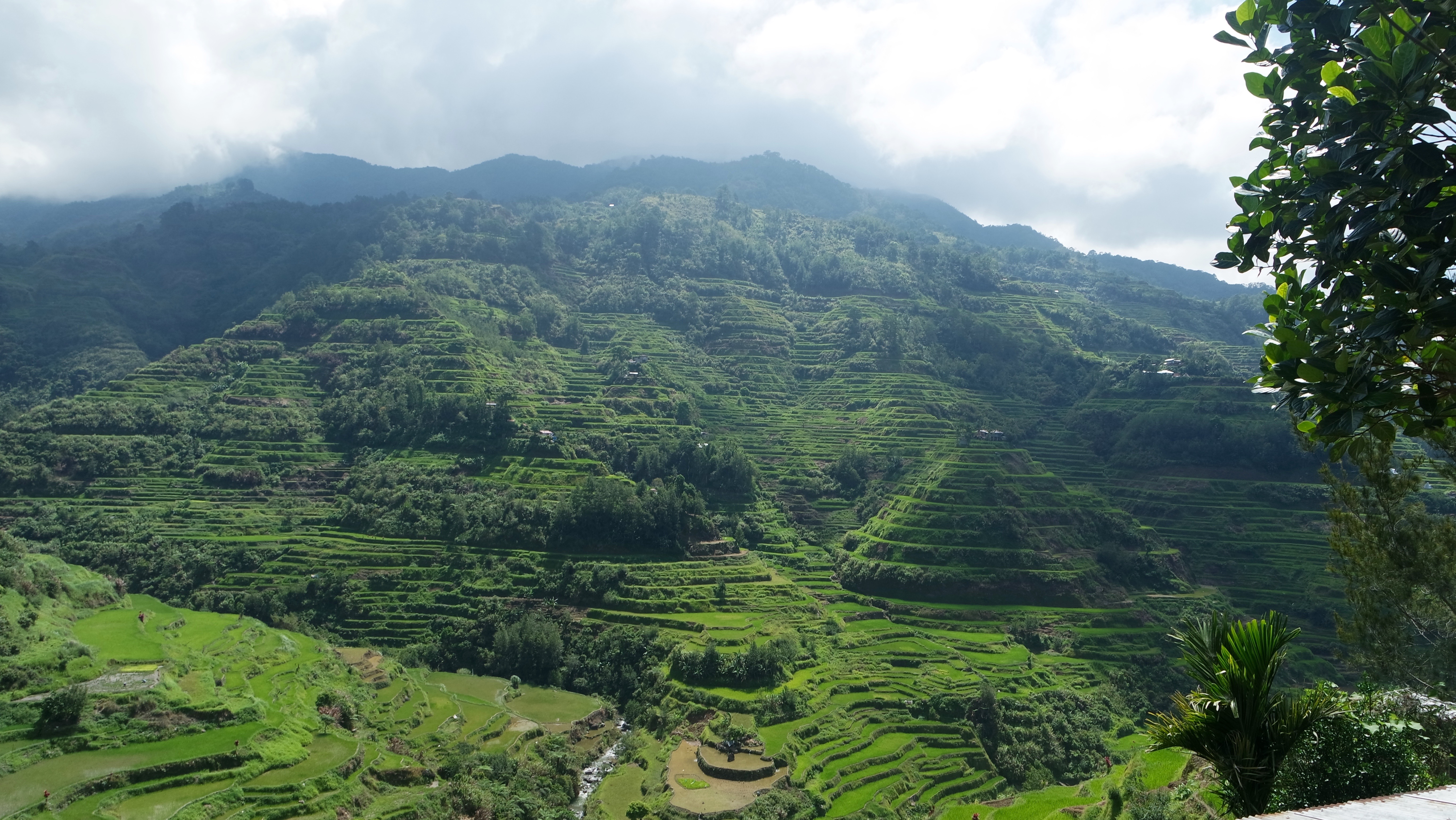 The rain has just stopped. A sweet afternoon mist has landed over the forest. I am watching outside as I take a bite from a bread loaf. Quite enjoying myself in Sagada Homestay’s terrace overlooking the town. I don’t even mind, my only friend being here is an 18 years old, German teenager called Jerry. Jerry doesn’t possess even one grey cell that is interesting. Soon, he won’t be having much of his grey cells anyway. Since he arrived to Sagada, he is dying to see the marijuana fields. (My bread turned out to be a coconut one, so crushed now) I am listening to the sound of roosters who apparently think crowing is a good idea at 5 pm as I stuff the last piece into my mouth. I am in a mountain village. In the morning, a 3 hours long Eko Valley hike literally kicked my ass. We climbed through muddy paths, among the rocks and rivers. I completed the parkour but when I arrived to the bottom of the stairs that will lead to my hostel, sleeping outside for the night truly crossed my mind. 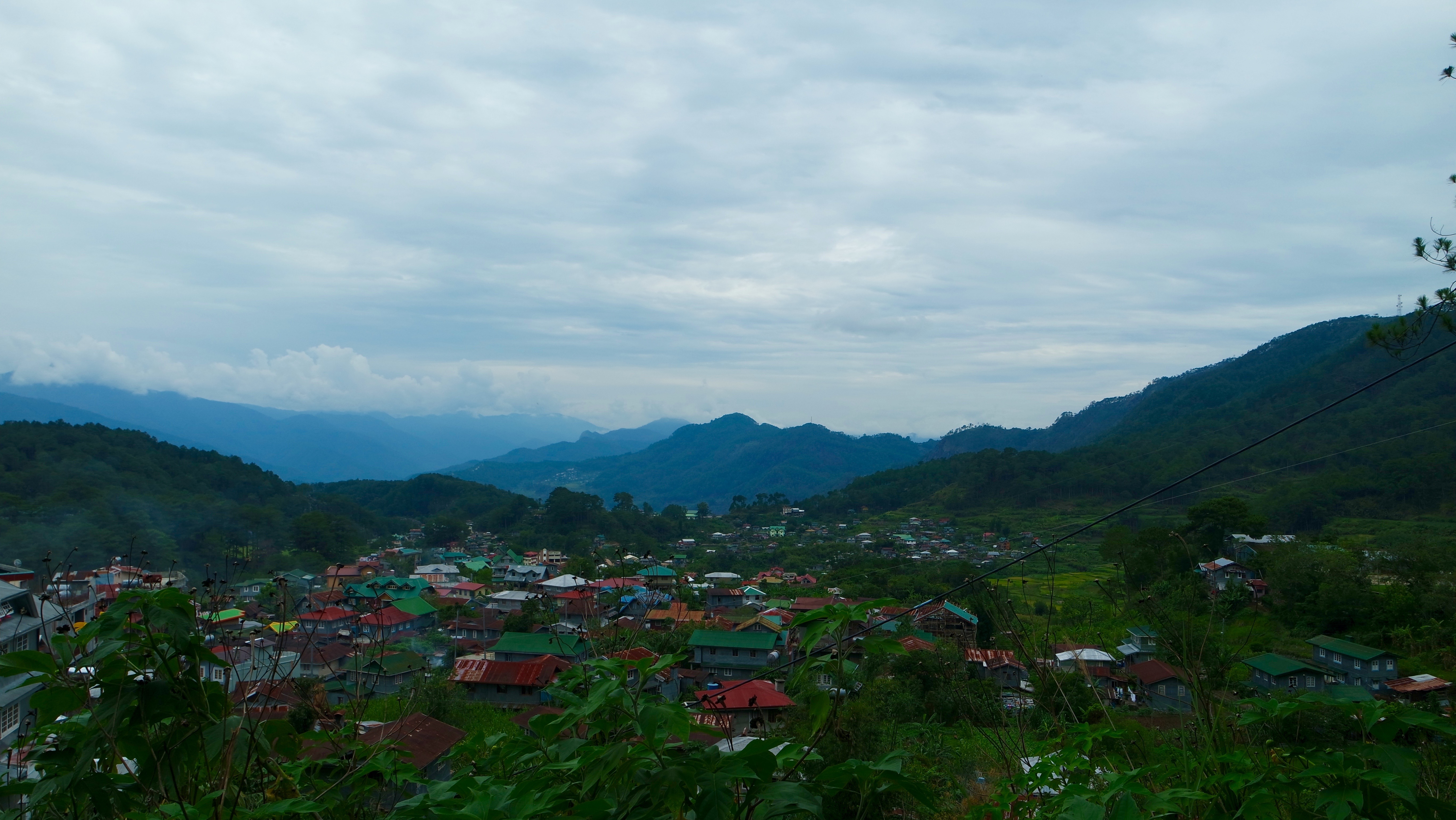 Sagada From a Distance

Sagada is one of the last stops of the Philippines. I have been traveling from one island to an other over a month.

I really didn’t enjoy Cebu much, a voice inside me was telling me to go to Palawan, so I listened to it. After Bantayan island and a few days spent in Maolboal, making dives to see the sardine schools, I hopped on a plane and arrived to Puerto Princesa. 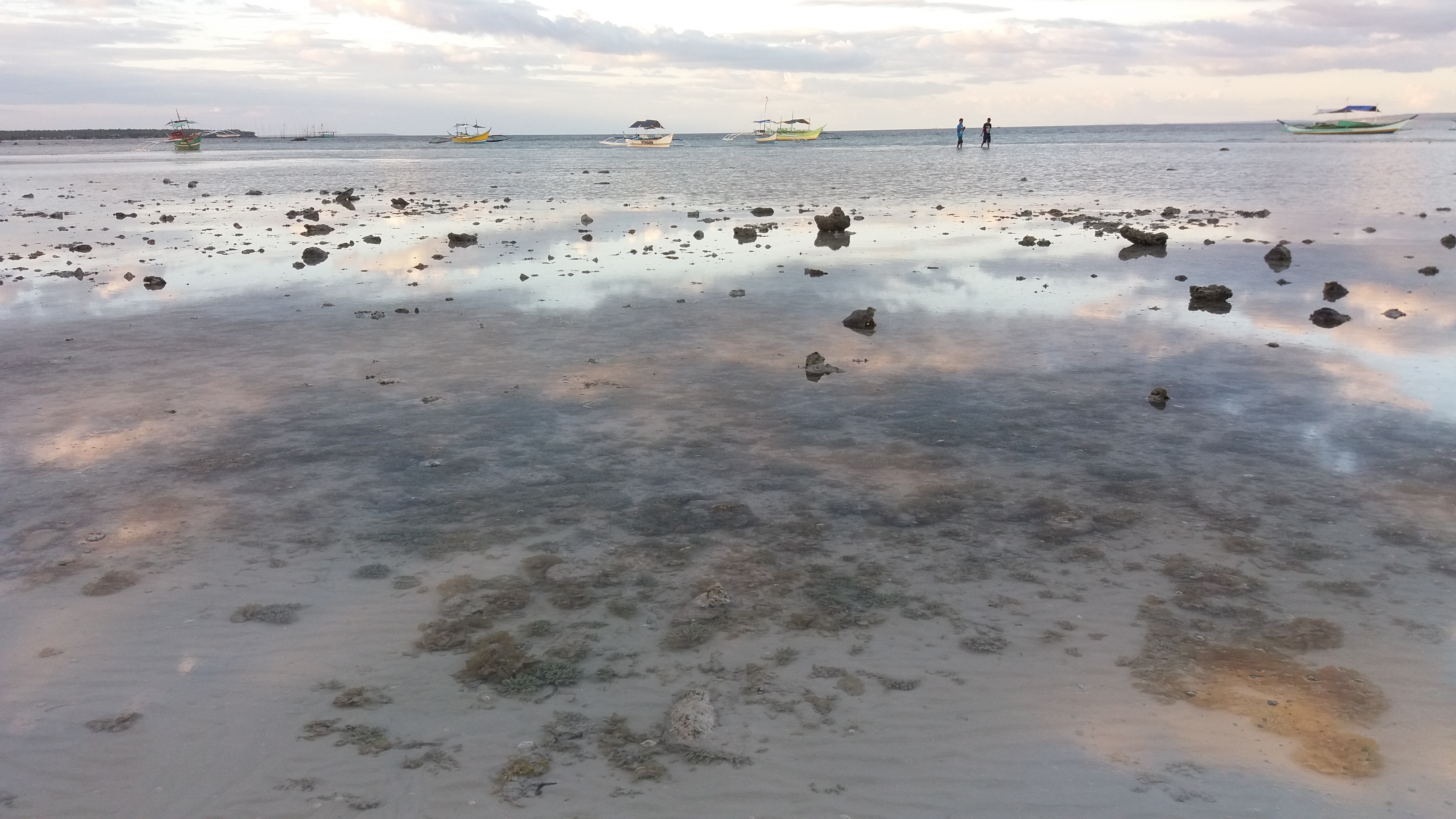 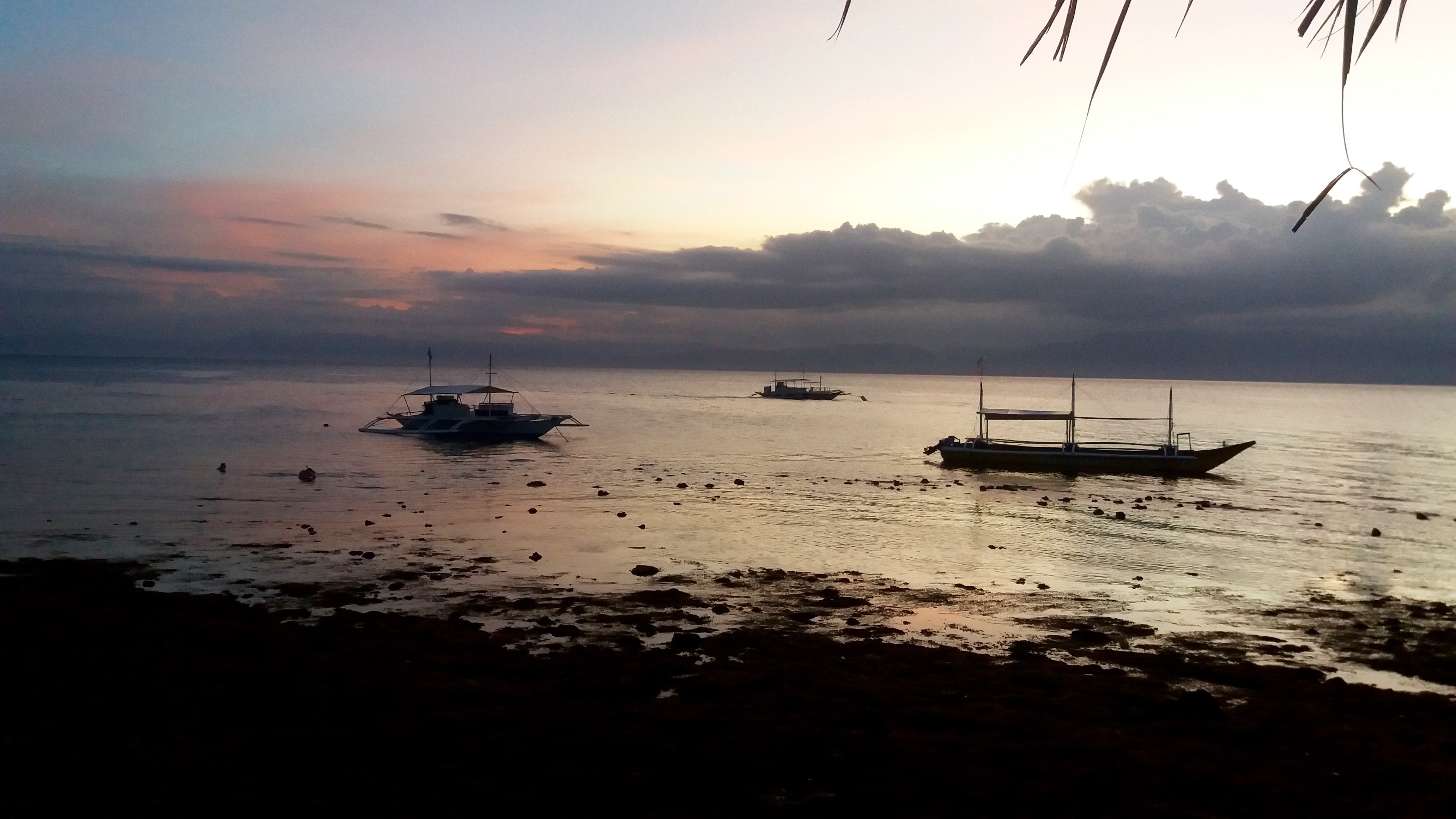 There, meeting J. an American traveler and deciding to go to Sabang with him has became the turning point of the trip. Except the 3 days I have spent in port Barton, we completed the Palawan route with my new friend. The camp we made in one of the El Nido islands was spectacular. 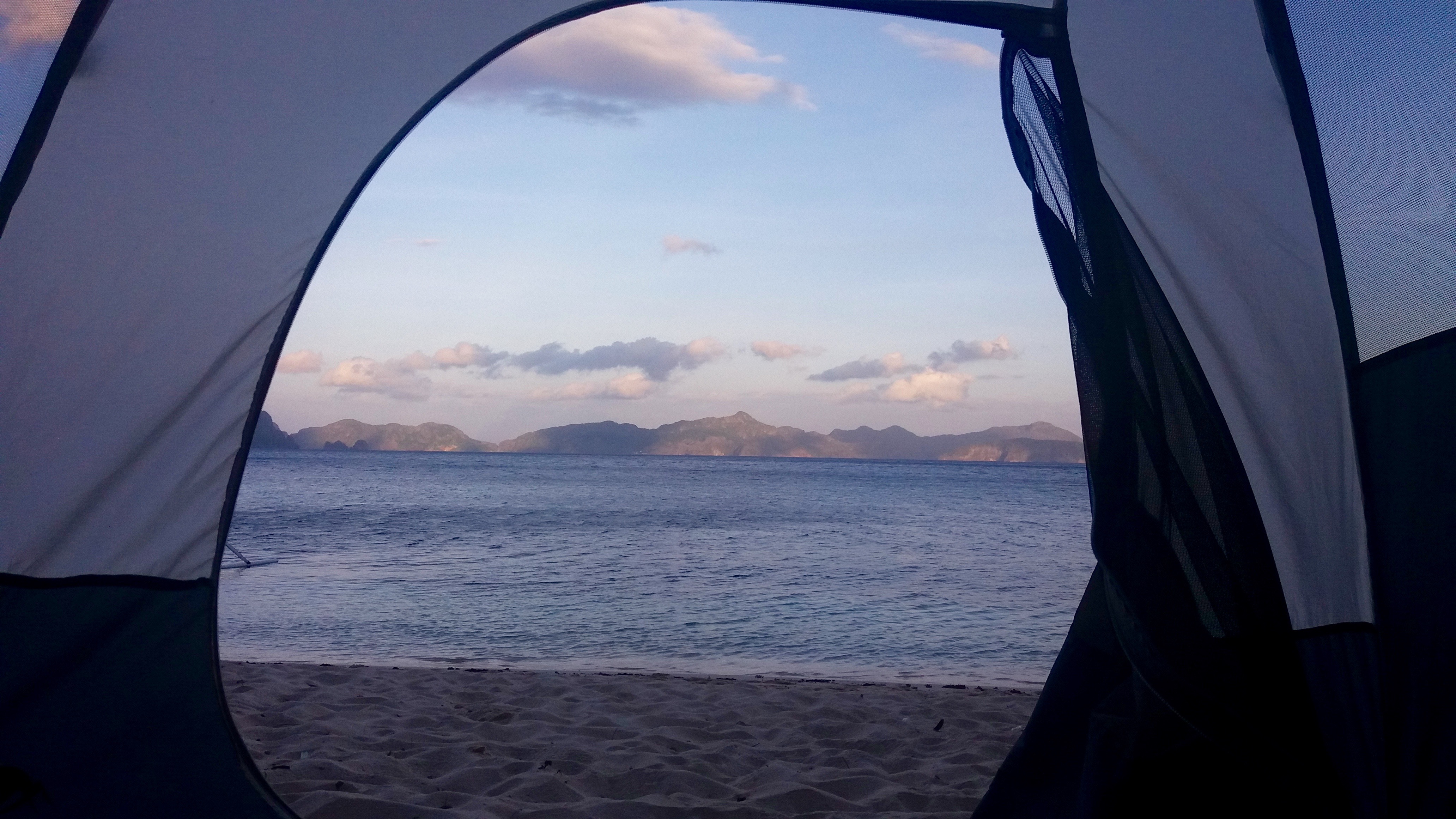 Imagine waking up to a view like this. Best part of our camping adventure in El Nido

With no disruptive lights, this was the first time I have seen the Milkyway with all of its glory. Can you get high by just looking at the stars? Well, apparently you can.

El Nido is nothing much as a town. There isn’t a nearby beach to swim, either you have to take a motorbike or a boat. But the islands around are as beautiful as fairy tales. They sell tours grouped as A, B, C and D. We bought tour A, followed by an overnight camping on an island and tour C for the next day. Once our tour ended, we didn’t linger much in El Nido and headed to Coron, taking a 6 hours long boat ride. 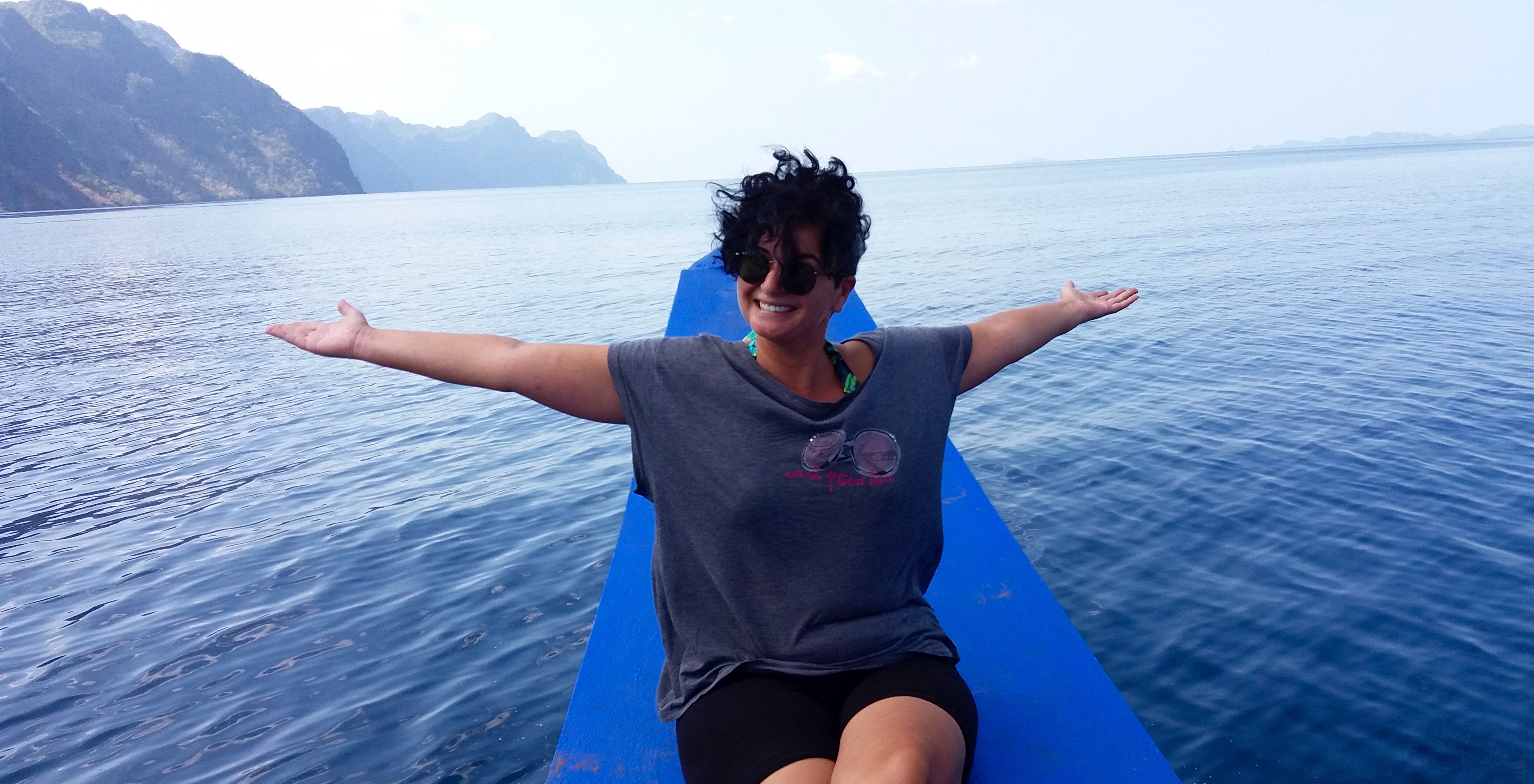 On the Way to the Dive Sites

Also there is Baracuda lake where the temperature of the water hits to 40 C0 degrees when reached to 10 m depth. As you ascend, the temperature cools down but your mask gets steamed, giving you a nearsighted feeling. Diving to a lake where salt water meets fresh water was a truly exceptional experience for me.

Coron is not a beautiful town as well but, around the island, there are 7-8 Japanese freight and battleship wrecks from WW2. 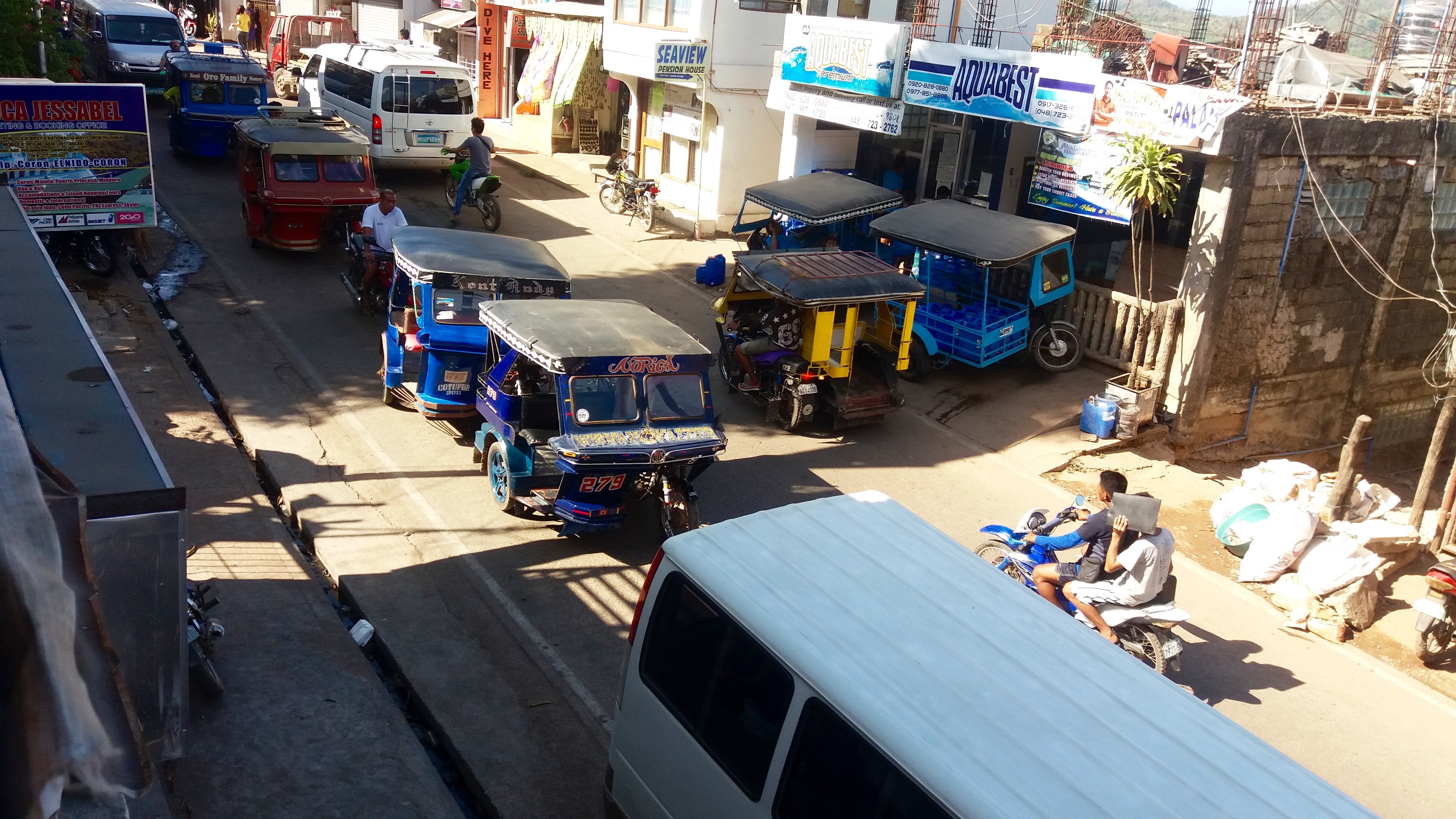 After spending 4 days in Coron and a 17 hours long ferry ride back to Manila, J and I separated our roads. He took off to China and I… I was so exhausted that I couldn’t find the energy in my body to leave the hostel in Manila for 3 days straight. Our Giant Ferry to Manila

Well, having great wifi in the hostel and being able to catch up with the latest episodes of Game of Thrones has a big share in this but still it was more than 35 C0 outside and one must be crazy to wander in the streets of Manila.

It was time for me to hit the road one more time, to see the rice terraces in Philippines which were on my mind since I came here. You have to take a 7 hours long, challenging bus ride to arrive to Sagada, from Manila to Baguio first. Baguio is a mountain city or a mountain made of a city some may say. When I arrived to Baguio, it was pouring like crazy. Of course, like everywhere else around the world when pouring, taxis have vanished into thin air. Thanks to Grab, an uber-like app I managed to get one and arrived to the hostel. I have stopped making hotel reservations in advance a while ago. This has two reasons, one in Philippines many of the hotels doesn’t get listed in the reservations sites. If you try to book one online, the only ones you can find are the expensive ones. Two, I got really relaxed about traveling. Thinking, I won’t be sleeping outside anyway, I start to look for hostels after I arrive to my destination. If there is one I have read in the blogs or so, first I head there. If they have a free bed, perfect! If not, tough luck… Anyway, there isn’t much to do in Baguio for me. I head to to the bus station after spending night in the hotel. In a blog, I have read that it was two hours between Baguio and Sagada but in the hotel I found out that it was between 6-7 hours which really killed my spirits about the journey.  There were no seats for 10:30 bus so I booked one for 11:30 and killed time in the terminal until then. Interesting enough, the bus left just on time.

In Asia, every country has an understanding of time of their own. In Thailand there is Thai time; if your boat is at 5 pm you have to ask if it is in Thai time or normal time. Thai time generally means 1 or 2 hours late, that is if you are lucky. Here they have Filipino time. It is also in a few hours ahead from normal time. For example if they are going to pick you up at 6 am, they never show up before 7. Anyway, let’s get back to our subject. When I first got on the bus, I have realized the plastic bags attached together, dangling from the ceiling and thought that they were for our use as trash bags. Apparently I was wrong. They were there if we throw up. As we climb uphill, taking the sharpest turns, the children on the bus start to throw up one after the other. Our view is breathtaking, smoky mountains, rivers, forests as such but it is almost impossible to enjoy it because of the nausea. These children are so well behaved, they keep silent even when barfing. If I were them, the whole bus would have decided to walk the rest of the way.

And it starts to rain. Perfect! I reached to Sagada after 7 long, torture filled hours. Of course as a privileged traveler, I tend to exclude myself from the concept of time. Most of the days I even don’t know what day it is. So I chose to arrive to Sagada on a Saturday. All the hotels are full of local tourists who came to enjoy their weekends. I met Jerry after 3 minutes I left the bus. We walk from one hostel to another. Everyone is telling us to come tomorrow. Alright let’s come tomorrow but where are we going to sleep tonight?

After we got soaked under the pouring rain, we managed to find a crappy hostel which has a room with twin beds. We decided to share room with Jerry but I reconsidered this decision right after he asked if it is ok for me, him smoking weed in the room. Like a grandma I respond “Please go smoke in the balcony, you will stink the room” As I smoke a well deserved cigarette along him, I take a few puffs from his roll. My god, how strong that s.hit was! I got a massive paranoia.

As I stare at Jerry’s small scaled Rambo knife, I keep agitating myself by questioning whether it was a good idea to share the room with a person whom I met 5 seconds ago. My paranoia grows bigger and bigger by time so much that I make sure that Jerry fell asleep before I do.

The hotel was a real crap so as I woke up, I went to Sagada homestay and settle in my room.

Pure bliss… My room was really nice. Since I was staying in the dorm for the past 5 days in Manila, the happiness of having my own room make me tumble on the bed.

The same day Jerry and I, decided to hike to the Bagot lake with an expectation of a spectacular lake view.

When we finally arrived to Bagot, our disappointment was read from our eyes. You can even call it a pond, it is a small hole filled with muddy water. As we stared at “the lake” for 10 good minutes, we walked back the same road to the hotel. 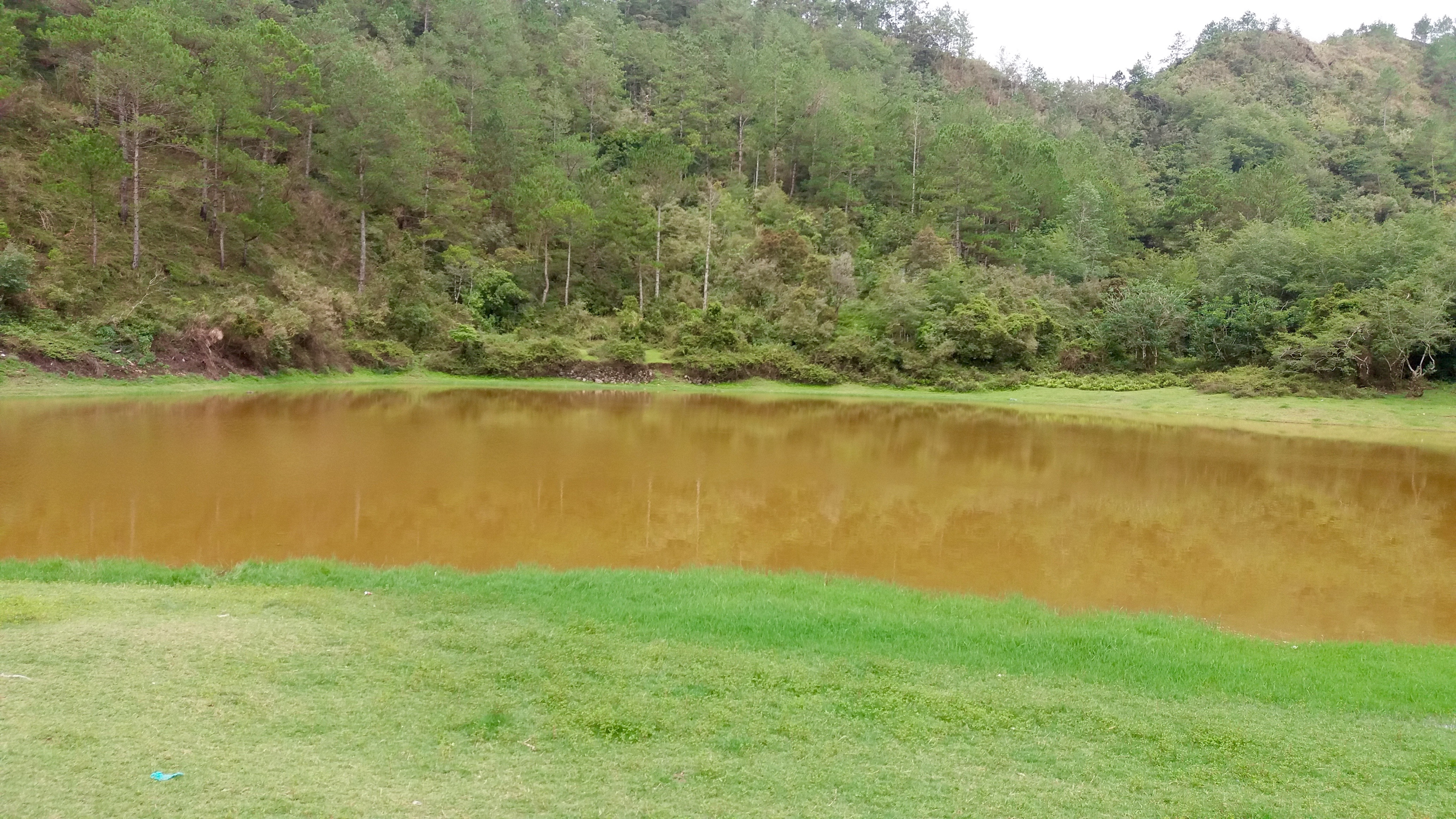 Today, we decided to make the Echo Valley tour with a guide. To see the hanging coffins, the caves and waterfalls.

The road was all muddy due to the heavy rain one day ago. A bug got stuck on me, I feared it was a tick but I think it was something else. Cleaned the bite mark with alcohol so I think I will be fine. 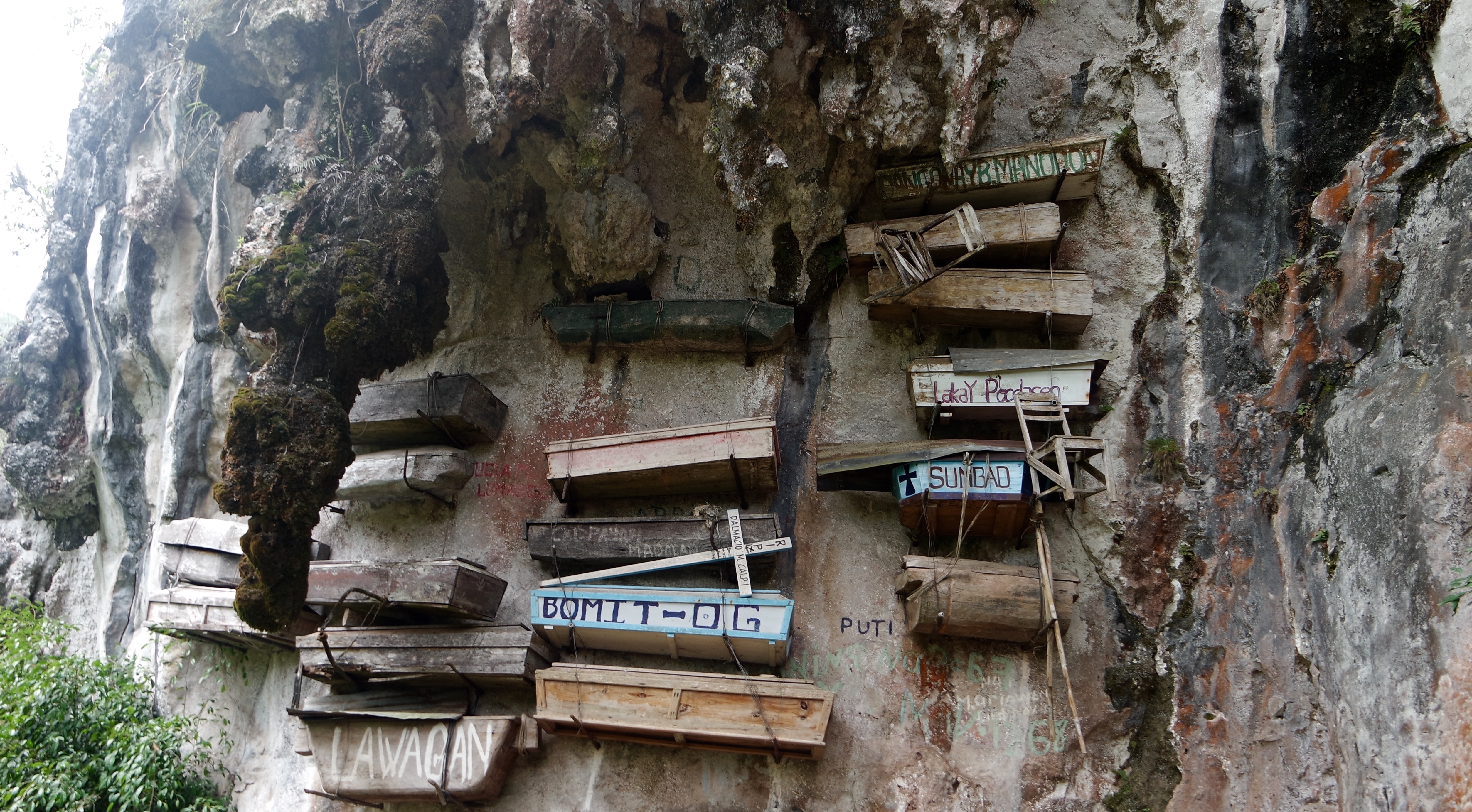 A pre-Christian burial method in Philippines: the hanging coffins.

Anyway, for 3 hours we climbed up and down the paths. I hate climbing up, seriously. As I keep myself pushing the road gets more and more challenging. We jumped over the rocks and stuff. My agility is quite well but I can not say the same for my stamina. My heart starts pounding like crazy, most probably because of smoking. As my face got as purple as an eggplant, my t-shirt is soaked with sweat, the wind kept giving me the chills. Our guide is quite unhappy, no idea why. I don’t like the people who don’t like their jobs. The information he was giving us was very superficial and he was reluctant to answer our questions. I was already at the verge of a breakdown and this became a cherry on the top.

I have been in my room since we have returned at 2 pm. The hotel has a restaurant but it is closed today. All I have is a small jar of peanut butter and a loaf of coconut bread.

The rain slows down time to time but usually it is very strong. The rainy season for Philippines is approaching… I am so lazy to go out and look for food. There aren’t many vegetarian options anyway. I just sit in my room and watch the rain from the window. I feel quite good. It is almost time to leave Philippines and I am totally ok with it. 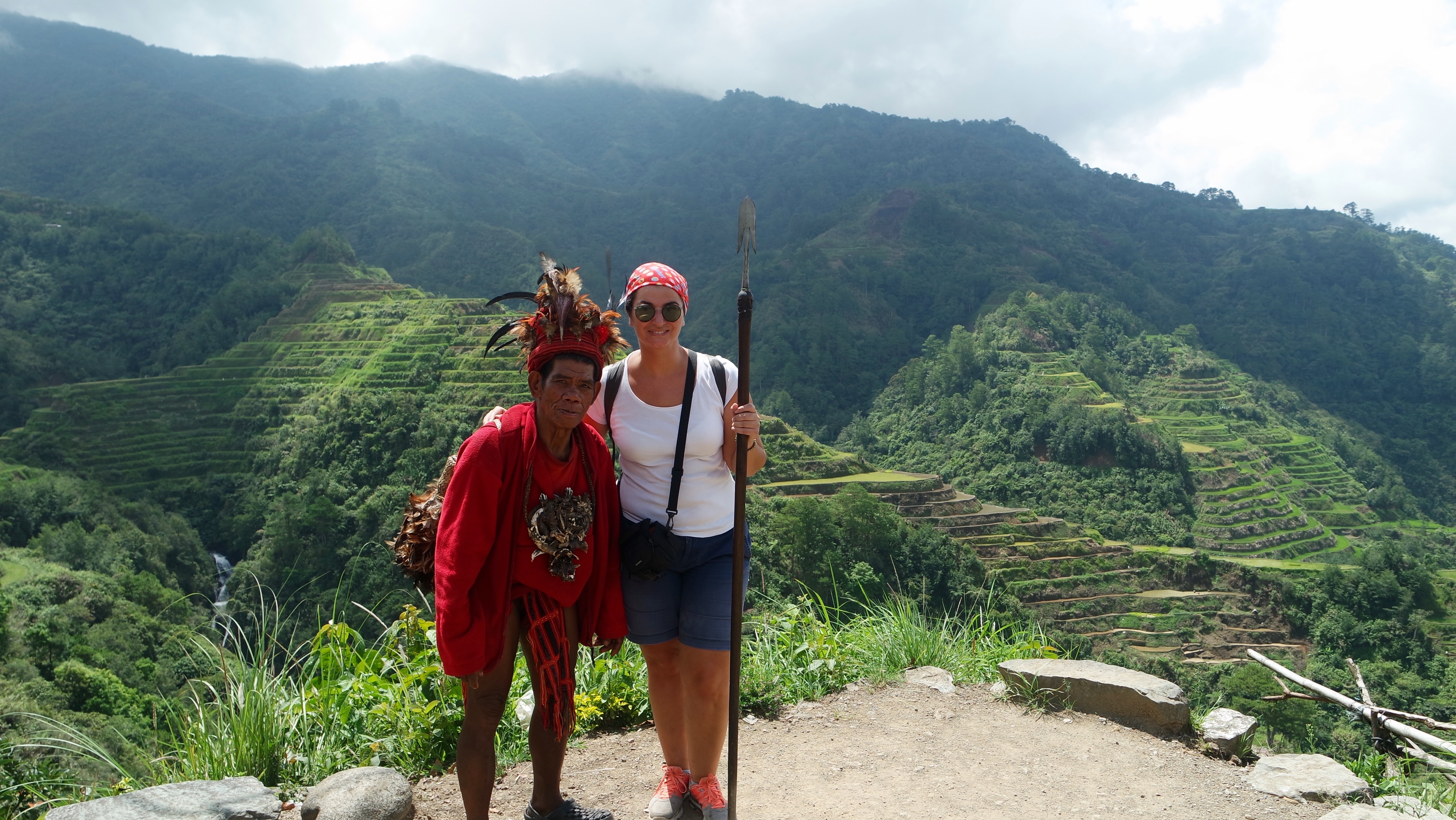 After I wrote these lines, I have stayed in Philippines one more week because I wanted to see the rice terraces in Banaue and Batad. Both were amazing but I had no idea that Batad hike was this much difficult. Along the trail, when I saw the t-shirts written “I survived Batad” I understood that it was way over my head. But thanks to my stubbornness, I managed to complete the 3 hours hike, under the rain. When returning, as I was about to step from the dirt path to the concrete road where my tricycle driver was waiting, I raised my arms and yelled “I survived Bataaaad” right before I fell into a ditch.

As three Filipinos helped me out, with this last minute score obviously I wasn’t able to survive Batad.

I cursed at myself beneath my teeth as I was shivering under my microfiber towel, on our way back to the hotel.

The next day, after a very bumpy night bus ride I arrived to Manila to catch my flight to Jakarta. Goodbye Philippines, Hello Indonesia!